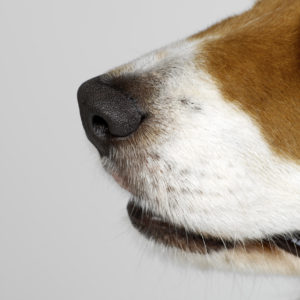 Humans and canines have a very different take on the environment they are in. We visualize the world whereas dogs smell it. I see a bowl of stew for example – I can see the ingredients and smell some too. But for a dog it’s quite different. The dog can see with the eyes a brownish bowl of food but their amazing sense of smell will help it detect what meats are in the stew, in what amounts, and just how much of any ingredients like salt or beef or spice is added, even gauging the temperature.

When dogs sniff each other’s bums in the park they can tell the age, sex, state of health, readiness to mate and a host of other things we are just beginning to understand.

It’s not surprising really that their sense of smell is so acute – we have approximately 5 million scent receptors but dogs have 125 million.

Dogs have been trained and been shown capable of smelling cancers, corpses under water or buried, drugs hidden in bags inside fuel tanks, and to track people from the tiny particulates we leave behind, sometimes days later and over many miles despite wind and rain. A dog can smell a human fingerprint! Sniffer dogs are rewarded when they seek and locate the particular target of choice.

Here at Animal Ark we train dogs to avoid the smell of snakes using electronic stimulation and they soon realize the target smell is unpleasant and should be left well alone – it’s aversion training. We wouldn’t want to train the dog to find a snake and then be rewarded for it. Far too dangerous a technique – unless of course you want a trained snake tracking dog – in which case positive rather than negative conditioning is the way to go.