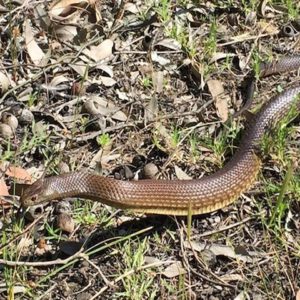 In Australia snakes can be found in almost any environment from the CBD to surrounding suburbs and from the beach to the bush. We have 188 species nationally and 100 in WA alone. Around Perth 21 species can be found. In Australia around a dozen snake types are considered dangerously venomous to both pets and humans.

All the dangerously venomous species are scientifically grouped together as Elapids. Elapids have many teeth including 2 short fangs, these are fixed in position as opposed to vipers that have long fangs that fold back in the mouth (no vipers occur in Australasia). Snake decide whether to use venom or not.

Venom is a highly modified saliva helping snakes to immobilize and digest prey, it can however also be used for defense. Generally Australian elapid snakes like tigers and brown snakes are not considered aggressive. They try to avoid conflict with people and pets and are very shy and elusive. However an injured, aggravated or threatened snake can be a very dangerous and quick animal to deal with. Dogs and cats are most often bitten whilst investigating, chasing or attempting to catch and kill snakes.

Keep still – they just go on their way.